A patent for flavour modifiers for meat substitute products takes us closer to creating a piece of meat made entirely out of vegetable products, but indistinguishable from the real thing in every respect: flavour, texture, colour, how it cooks… 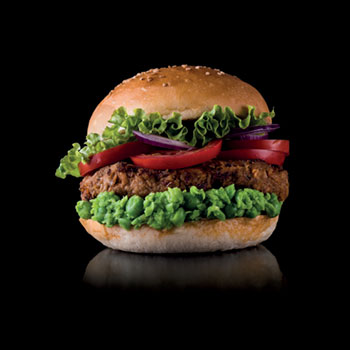 In 2018, we published a patent for flavour modifiers for meat substitute products and we developed the know-how and technology to produce a very realistic, chicken-like texture and flavour.

Consumers with dietary approaches including vegetarianism, veganism and flexitarianism, want to completely eliminate or reduce the amount of meat they eat. They are motivated by ethical concerns regarding the ways animals are treated, concerns for the environment as well as for their health: they are looking to reduce their consumption of saturated fat while still getting the protein they need.

Still, many people are unable to fully commit or wind up going back to meat. Thanks to Plant Attitude – the programme around our plant protein capabilities – we know that taste and experience play a big role in whether this is the case.

Three years of research into the difference between the characteristics of vegetable and animal proteins has allowed Givaudan to develop and launch a meat protein flavour enhancer to address the taste aspect of this difference. Givaudan also developed and launched a product that is the culmination of three years of research into the characteristics of vegetable protein and the difference between that and animal proteins. Understanding the gap between them, we created a meat protein enhancer flavour that addresses the taste aspect of this difference.

Positive impact on the environment

Cutting-edge researchers in the disciplines of food, nutrition and environment recommend that we eat a more plant-based diet because it is one of the main ways in which we can reduce our greenhouse gas emissions.

We estimate that sales of meat substitutes that we have worked on over the last few years have reduced CO2 emissions by about 563 tonnes – our goal, however, is to multiply that by 100 times.